Robotic Process Automation (RPA) is one of the hottest topics in the business transformation world, but to many organizations, it’s entirely new. Companies that are just getting started with RPA want to know how to build a scalable RPA capability that will drive long-term success with automation. Intrinsically, many businesses wonder if they can leverage the traditional software development team that they already have in place for automating back-office work, or if RPA development requires an entirely different skill set.

First, let’s look at what RPA is and isn’t. RPA is a powerful capability for automating your business processes by programming digital workers, or bots, to perform routine, rules-based tasks. By streamlining these tasks, RPA increases efficiency and productivity, saves costs, reduces errors, and enables employees to spend their time on more engaging, high-value work.

Despite these many benefits, RPA is not a magic wand; it requires proper program management from end to end—just like any other program.

What is RPA Software Development?

RPA software development is streamlined with low-code tooling and does not use traditional scripting languages. That’s because RPA coding is specifically designed for ease of use and increased efficiency in automating routine, rules-based tasks, such as: 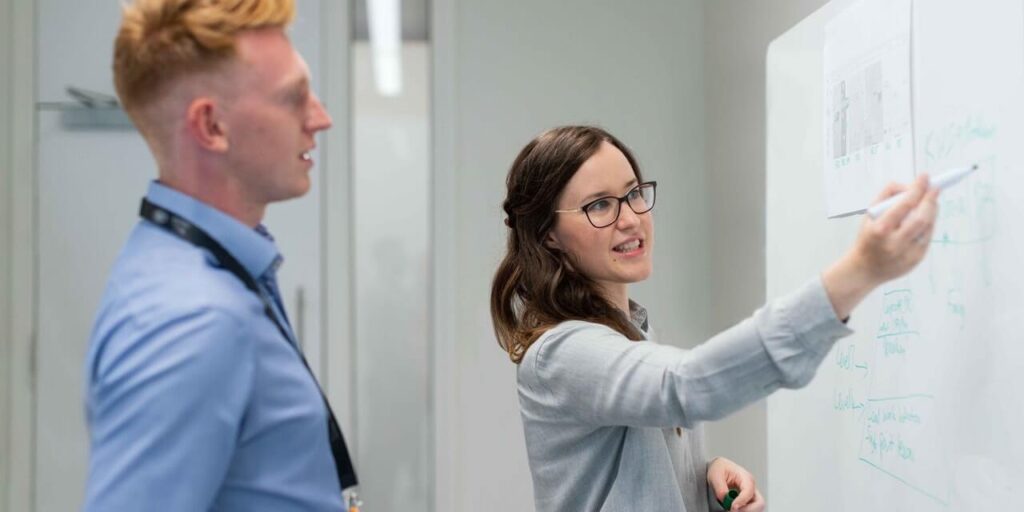 Now let’s dive into what’s different, so you can set your team up for a successful RPA program.

RPA code is built on Actions that encapsulate common interactions human users make in a computer environment like clicking links, copying text, opening browsers, logging into web apps, etc. Within RPA, developers can simply drag and drop these Actions in a logical order.

This streamlined tooling makes it possible for developers to create and execute automation scripts quickly and more easily than with software development methods. This notwithstanding, the way the code is organized and documented is equally important in both disciplines to ensure stability and maintainability.

Maintainability is vital to software development, and RPA is no exception. A major benefit of RPA is that properly developed RPA automations will require fewer lines of code and contain less complex syntax, making it more digestible and easier to maintain and expand.

Unlike traditional software development, RPA coding isn’t heavily tied to the original developer’s stylistic leanings. This makes it much easier for others to maintain and update after the original deployment. All this places good maintainability of your automation scripts within easier reach to reduce the risks of business disruption and inefficiencies in the event of developer turnover.

A traditional software development approach to automation relies on libraries and independent software tools all pulled together into a coherent software stack. This is necessary for an automation script to function, and for an end-user to deploy and trigger the scripts, as well as gain visibility into script runtime activity for maintenance.

RPA, on the other hand, is designed to be a full-service platform. All of the functionality you need to develop and manage automation scripts comes packaged within the RPA software.

This means that with RPA, all your automation scripts are accessible in a centralized repository and their status can be examined through any of the dashboards your RPA platform provides. Scheduling and overall management of when the script should run, and whether it should run based on a time trigger, or an event trigger is also easily managed by the RPA platform. While these are all things that can be accomplished by traditional software development methods, decentralized hosting among disparate tools creates complexity and increases maintenance requirements.

4. Work With or Without APIs – The Best of Both Worlds

The problem is that an API does not always exist for every piece of software and if it does exist it only exposes limited functionality. Furthermore, learning and becoming proficient in the inner workings of an API can be time-consuming.

RPA leverages the best of both worlds when it comes to APIs. That is, RPA allows you to automate actions within software that does not have an API by interacting directly with the user interface. And if an API does exist and you would prefer to interact with it, you can simply insert code “snippets” that contain traditional programming statements as self-contained modules within your RPA code. This makes it easier and faster to program RPA in the way that works best for your processes.

Furthermore, you get the benefit of built-in, centralized real-time monitoring and management of your entire automation program.

If you’re considering implementing RPA within your company, take a look at our Executive Guide to Automation before you get started.