The first step towards success with RPA is understanding the common pitfalls organizations encounter on their automation journey — and how to avoid them! According to a 2019 study, 30% to 50% of all initial RPA projects fail, but it’s not because of faults with the technology. The reason these projects fail, in most cases, is inadequate planning.

Here are four common ways ineffective planning can cause RPA projects to fail:

1. Running Out of Steam

Automation is exciting! The promise of greater efficiency, higher profits, and processes that operate like a well-oiled machine generates enthusiasm, especially among leadership teams.

However, many companies make the mistake of building excitement and energy around the first project without a clear idea of how to build the program from there. They approach RPA from a project-centric view rather than taking a program-centric approach that positions automation as a new capability that will positively impact the organization as a whole. Once the initial project has been completed, enthusiasm wanes, and there’s no clear vision of where else to apply the new-found ability.

2. Picking the Wrong Projects to Automate

Some teams feel the need to start with the most complicated use case to validate the technology. They’re (understandably) motivated to get a big win right away! The problem with this approach is if the first project is too large or overly complex, developers and leaders both become frustrated at how difficult it is or how long it’s taking to implement. In response, they abandon the project before they ever see results.

In addition, some tasks and processes are simply not a good fit for automation. For example, RPA may not be the right solution for streamlining processes with significant variability or tasks with insufficient volume to produce a meaningful ROI.

Plus, many companies underestimate the value of a small project that builds trust in the technology across the organization. After all, when employees don’t understand how RPA works, they’re bound to feel some anxiety about the impact it might have on their jobs. Without establishing trust from the beginning, it becomes much more difficult to build a successful, company-wide RPA program. 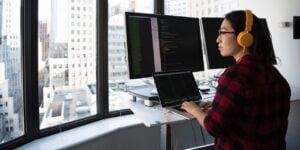 Picking the right project can make or break a company’s success with RPA, but even the right project can be derailed by constant, unforeseen maintenance issues. Many teams begin automation projects without first having a good understanding of how the selected process works today, how frequently it changes, when it needs to scale up or down, and other factors that require the automation to need adjusting after launch. This ineffective planning often leads to unexpected maintenance issues or “broken bots.” The bots aren’t really broken, of course, but they encounter a situation they were never built to handle and stop working. This begins a frustrating cycle that derails RPA programs.

Before a company begins an automation project, whether it’s the first or the 50th, it’s critical that all stakeholders understand the maintenance requirements — and program the bots to accommodate them — to keep processes running smoothly and avoid broken bots.

4. Not Having the Right Team

Another common reason automation initiatives fail is that companies don’t put the right team in place to effectively execute and deliver RPA projects. A successful automation program requires a team with a broad set of skills, including automation design, process mapping and optimization, programming, and project management to name a few. Companies that fail to establish the proper team, sometimes call an automation Center of Excellence (CoE), often find themselves in a classic “too many cooks in the kitchen” (or perhaps “not enough cooks in the kitchen”) scenario, resulting in inconsistent and unsatisfying results. While a CoE isn’t necessary for a pilot project, it is absolutely required in the long run to keep automation plans on track and accelerate the rate of adoption across the organization.

The key to avoiding these challenges and ensuring success with RPA is simple: proper planning. To learn more about how to plan a successful RPA program for your organization, look no further than R-Path Automation’s Quick Start Methodology here, or schedule a call with us today!

Best Practices
Older Post How To Best Utilize Employees vs. Digital Workers vs. BPO Partners
Newer Post Why Banks Should Utilize RPA in the Post-Pandemic Era